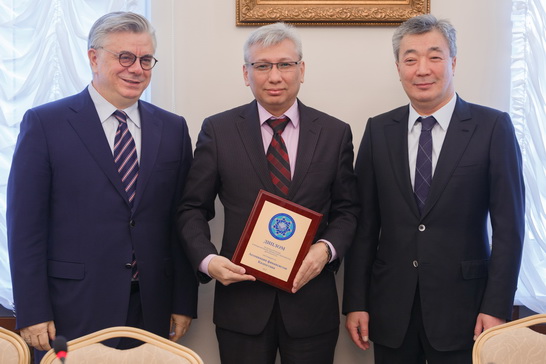 The IFN CIS Forum 2017 was held on March 14, 2017 in Rixos President Astana  (Astana, Kazakhstan). The Forum was organized by Astana International Financial Center (AIFC) together with REDmoneyGroup. The key issue of the Forum is to facilitate Islamic financing in CIS and to analyze investment opportunities in the region, as well as to establish contacts and partner relations between the participants.

The Financial and Banking Association of EuroAsian Cooperation (FBA EAC) was represented by the Chairman of the Universal Commodity Exchange - Eurasian Cooperation (UCEX) Alexander Uzskikh.

As the Managing Director of AIFC K. Kelimbetov pointed out, Islamic financing is one of the five priority development vectors of AIFC. Today AIFC is creating favorable legal and regulatory conditions for Islamic financial institutions.  General Director of Islamic Corporation for the Development of the Private Sector (ICD) Khalid Al-Abudi underlined the high potential of Islamic financing in CIS and pointed out that Islamic funds helped to diversify financial resources for infrastructure projects. According to him, Islamic micro-financing is the best instrument to decrease poverty.  During the session “Barriers  removal on the way of Islamic financing development in CIS” the participants of the discussion told about the difficulties they face and suggested their ideas regarding the growth of Islamic financing industry in the region. The session “Regional development supported by funds raised in accordance with the principles Islamic financing” participants discussed the ways of Islamic support to regional resources in oil and gas sector, energy, agriculture and halal-industry, and also the profit from Islamic financing for the representatives of small and medium business     of CIS countries.  The meeting of regional financial regulators also was held during the Forum, where the participants discussed legal and normative issues. Experts also shared opinions regarding the changes which could facilitate the Islamic financing. At the end of the Forum the seminar “Sukuk – Alternative type of assets” was held which involved Nasdaq Dubai, Emirates NBD and Norton Rose Fulbright. The seminar covered the Sukuk market (Sukuk is an Islamic paper security), details of some types of Sukuk as a case-study, and also Sukuk issue and listing.

This post is also available in Russian: Форум IFN СНГ 2017